I love sharing the gospel on college campuses. Most of the students with whom I interact are polite, respectful, and reasonable. The campus of California State University Northridge is a place near and dear to my heart. Two of my daughters graduated from CSUN with degrees. I have been engaging in evangelism of various kinds on the CSUN campus, for more than six years.

As nice as most of the students are, every once in a while I run into someone like Gordon.

The first words out of his mouth were these. “How many dead babies does it take to paint a wall?”

It takes quite a bit to render me speechless. Gordon succeeded in rendering me speechless for a couple of seconds. Every day I hear the abundance of people’s wicked and depraved hearts, rom which they speak. There’s little that surprises me anymore–especially when it comes from atheists. They are living illustrations of the biblical adage “There’s nothing new under the sun.” But Gordon’s level of verbalized depravity surprised me.

Gordon didn’t stop there. He had a few more hate-filled, disgusting “dead baby” jokes to tell me. I wondered if Gordon was like his parents or if his parents were terribly and desperately worried about their son. I wondered if they even knew their son’s heart was so dark and vile.

When Gordon took a breath after his last “joke,” I asked him what he thought would happen to him after he died. While he attempted to be matter-of-fact and flippant, trying to exert a self-ordained intellectually superiority, he revealed he knew there was more to life than living and dying.

I quickly turned the conversation toward Gordon’s worldview. Gordon approached me expecting one thing, but receiving another. Gordon expected to put God on trial. Instead, Gordon’s wicked heart and his absurd worldview was put on trial.

Gordon immediately gave up knowledge by asserting he could be wrong about everything he thought he knew. He insisted there are no moral absolutes, yet shortly thereafter insisted my gospel tract’s comparison between slavery and abortion was ridiculous and disgusting–making a truth claim and applying a moral standard he previously denied existed.

Sadly, Gordon is representative of many people who are comfortable living in absurdity, with hatred for God.

I pressed Gordon to justify his worldview. He couldn’t. His worldview crumbled as fast as his “dead baby” jokes would have crumbled if he was a comedian and they were part of his act at the Improv.

I explained to Gordon what he already knew (Romans 1:18-23). He wasn’t an atheist. His worldview was indefensible and absurd. In order to make any moral judgments that were binding upon anyone else but himself, Gordon would have to step in to my worldview to establish a moral standard. Gordon knows God exists the same way I do. The difference: Gordon lives in denial and I don’t. Gordon is comfortable in absurdity and I’m not. Gordon hates the God who has given him life and breath whereas I love God. Gordon is lost and bound for hell. I have been redeemed and saved by the grace of God alone, through faith alone, in Jesus Christ alone. 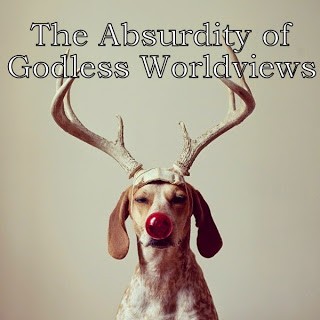 My conversation with Gordon wasn’t about who had the better scientific or philosophic argument. It wasn’t about who was more intelligent or who was the better debater. It wasn’t about who had the best evidence and who could provide the best defense. My conversation with Gordon was about worldviews–the Christian worldview founded upon the reality of the God of the Bible and the truth of His Word, and Gordon’s worldview. There are only two worldviews: the Christian worldview and every other worldview (whether religious or secular) heaped into one godless, steamy mass of absurdity and blasphemy.

Gordon realized he was in trouble and he had no way of climbing out of the mind-numbing hole he dug for himself. He looked at his cell phone and said he needed to get to class.

I wish Gordon had given me more time so I could have shared the gospel with him. As Christians, we should never settle or find contentment in crushing godless worldviews. The reason: those absurd and blasphemous worldviews are held by people—lost people bound for hell if they don’t repent and believe the gospel.

As Christians, we should always rejoice with the truth (1 Corinthians 13:6). But we should never rejoice over winning an argument or crushing someone’s worldview. While my conversation with Gordon served a purpose (hopefully an important one), he still walked away dead in his trespasses and sins (Ephesians 2:1-3), just as I would have walked away 30 years ago when I was his age. That’s nothing to laugh at. That’s tragic. That’s heartbreaking.

Please join me in praying the Lord will use my conversation with Gordon to soften his heart. Pray he will read again and again the gospel tract he received with me–every time further convicted by the truth it contains. Pray Gordon will repent and believe the gospel and not perish holding onto his blasphemously absurd worldview.

Here’s my conversation with Gordon.

Today I was blessed with the opportunity of preaching the chapel message at Unity Christian School, in Fulton, IL. The invitation came through the school's choir director, Paul Hopkins. My … END_OF_DOCUMENT_TOKEN_TO_BE_REPLACED