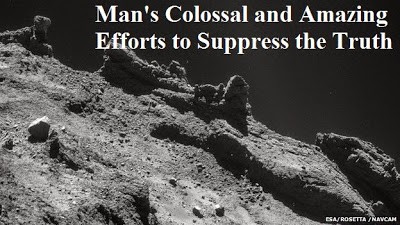 What a truly extraordinary technological feat!

On March 2, 2004, the ESA and NASA launched the Rosetta rocket into space. The rocket takes its name after the Rosetta Stone. On Wednesday, November 12, 2014, more than ten years after launch, the Philae lander touched down on the surface of the 67P/Churyumov–Gerasimenko comet.

So, maybe you’re thinking, “Big deal. They landed on a comet. So what?”

So what?! Think about it. Ten years ago some really smart folks launched a rocket, with the intent of landing a probe the size of a 3′ cube on a hunk of ice, only 5×3 km in size, while it’s hurtling through space at 41,000 mph!

Still don’t get it? Consider this.

What ESA and NASA accomplished last week was tantamount to this. Let’s say Iron Man (props to my comic book geek friends out there) expresses doubt about the true strength of Thor. Thor, with that smile that makes my daughters swoon, gentle drops his hammer to the ground. He looks around and happens to see a 250-pound block the size of a standard garage door. He picks up the block and hurls it into space. TEN YEARS LATER, the block lands on a rock half the size of Griffith Park (Los Angeles), which is 317 million miles away from where Thor and Iron Man are still standing (it was a quiet decade in the Avengers’ world). So precise was the throw that Thor hit the target, ten years later, while the target was traveling 31,201 times the speed of sound!

Yet when I read of the extraordinary feats of brilliant people, my amazement at what God has done is sometimes interrupted by man’s colossal and extraordinary efforts to suppress the truth.

On NASA’s Jet Propulsion Laboratory (JPL) website for the Rosetta Mission, there is a page dedicated to answering some basic, scientific questions about comets. One of the questions is, “Do comets carry the ‘seeds of life?'” Here’s the answer:

“When scientists looked into the dust they captured from the comet ‘Wild 2’ (Stardust mission, 2006), they found particles rich in organic matter. Could particles like these have served as the ‘the seeds of life’ on Earth, billions of years ago?

“Lindsay Keller, co-investigator for the Stardust mission, said that one of their first studies of Wild-2 samples ‘showed abundant hydrocarbons in many of the particles.’ This supports the theory that comets might have brought the these hydrocarbons, the ‘building blocks’ of life to Earth. Of course, we still don’t know what would have ‘sparked’ them into life, although scientists have their theories about that, too.”

These brilliant scientists, like so many in the scientific community did not launch a 250-pound probe into space and then landed it on a comet, in search for the truth about how life began. They set out and accomplished this colossal and extraordinary feat in a desperate, ongoing attempt to suppress the truth they have always known.

“For the wrath of God is revealed from heaven against all ungodliness and unrighteousness of men, who by their unrighteousness suppress the truth. For what can be known about God is plain to them, because God has shown it to them. For his invisible attributes, namely, his eternal power and divine nature, have been clearly perceived, ever since the creation of the world, in the things that have been made. So they are without excuse. For although they knew God, they did not honor him as God or give thanks to him, but they became futile in their thinking, and their foolish hearts were darkened. Claiming to be wise, they became fools, and exchanged the glory of the immortal God for images resembling mortal man and birds and animals and creeping things.

“Therefore God gave them up in the lusts of their hearts to impurity, to the dishonoring of their bodies among themselves, because they exchanged the truth about God for a lie and worshiped and served the creature rather than the Creator, who is blessed forever! Amen” (Romans 1:18-25).

And until they repent of their sins, including the sins that motivate their exploration of space, they will continue to learn, but will never arrive at the truth (2 Timothy 3:7).

Yes, I love science. I love how making observations about the world around me, including that which I can only see with a microscope or a telescope, affords me opportunities every day to worship the Creator–to proclaim back to Him how awesome are His works. And I thank God, my Creator, for saving me from my sin and His just wrath, through faith in His Son Jesus Christ. Because today, I can look to the heavens without suppressing the truth in my unrighteousness. Instead, I now see with clear eyes. The veil has been removed (2 Corinthians 4:1-6). I was blind, but now I see (John 9:1-41). I see a glimpse of how colossal and extraordinary God and His creation are. I look around, I look to the heavens, and I am bombarded with the reality that God is awesome.

If you do not know Jesus Christ as your Lord and Savior, please continue reading.