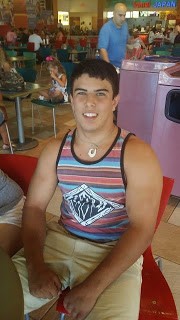 This is Patrick. Bart McCurdy, while “phone fishing” for yesterday’s edition of Cross Encounters Radio, met Patrick and his girlfriend in the Mount Shasta Mall, in Redding, CA. Patrick is 18 and entering his senior year in high school. Patrick is an athlete and a member of his school’s football team (defensive tackle) and wrestling team. Patrick plans to attend Mount Shasta Community College after he graduates high school. While he still has a full year of high school ahead of him, with time to make decisions about his future, at the moment he’s a bit rudderless, not sure what he wants to do with his life. Although not a hard and fast rule, his worldview does lend itself to indecision and indifference.

Patrick insisted he did not believe in God. Patrick made truth claim after truth claim while readily admitting he did not know anything with certainty. Patrick made definitive assertions regarding morality–assertions that were utterly arbitrary and non-binding, and consistent with a godless worldview. Like so many people–men and women, young and old–Patrick has relegated himself to an intellectually absurd way of life while, at the same time, living comfortably in a wantonly inconsistent frame of mind. Again, like so many others who have adopted and have tried to justify a godless worldview, Patrick knows his worldview is absurd and untenable, but he simply doesn’t care. Why? He hates the God who created him. He hates the God he knows exists (Romans 1:18-32).

Patrick’s issue is not one of a lack of intelligence. It is not that Patrick cannot reason. Patrick’s issue is also not one of a lack of evidence. After all, regarding God, everyone evaluates the same evidence (Romans 1:18-25). Like all others who have adopted his absurd worldview, Patrick’s issue is sin–specifically the sin of idolatry. Your see; Patrick and people like him (professed atheists) are very religious. They worship the “god of self.” They deny the God they know exists and try to replace Him (failing miserably) with the false god they see in the mirror every morning–themselves (Romans 1:22-23). Like others, Patrick’s love of self and love of sin, his self-worship, is born out of a hatred for the God he knows exists (Romans 1:28-31). Like the Roman Catholic, the Muslim, the Mormon, the Jehovah’s Witness, and the false convert to Christianity, Patrick worships a god that does not exist outside of his own sinful mind.

As you listen to my conversation with Patrick (second hour of the show), you will notice I did not make any attempt whatsoever to “prove” to Patrick that God exists. The reason: I refuse to blaspheme God in that way. What do I mean?

I don’t argue with anyone about the existence of God. I make no effort, ever, to prove to an unbeliever that God exists. What the lost sinner believes about the existence of God has no bearing whatsoever on the truth. It doesn’t matter what any human being believes. Belief is not authoritative. What matters is whether or not what the lost sinner believes is true. Truth is authoritative. And God is truth (Romans 3:4). And God’s Word is true (John 17:17). Beliefs apart from truth are arbitrary speculations, indefensible conjecture, mere opinion, non-binding assertions, and ultimately false.

My hope, as it is anytime I engage in “Phone Fishing,” is to present the law and the gospel to the person with whom I speak. This was true of my conversation with Patrick. However, things didn’t go as I planned. They did, however, go as God intended, for He is sovereign over everything and everyone. So, did I fail? No. The only time we fail in evangelism, so long as we are doing it biblically, is when we fail to evangelize. The vast majority of people in the world are like Patrick–lost, bound for hell, and indifferent to both realities. The vast majority of people in the world will respond negatively to the truth of God’s Word. The Bible is clear:

This is not to say there is no hope for Patrick. The Lord may still save him, and that’s my hope and prayer. I don’t want Patrick to perish in his sins (Luke 13:1-5).

No; Patrick is neither a dog or a pig.

Patrick’s wanton rebellion against God (Hebrews 10:26), which included admitting his willful efforts to deny truth by finding comfort in absurdity, did not make Patrick a candidate for the gospel, at the time I talked to him. But as hard as Patrick fought, I hope some seeds were planted. I hope someone else will have the opportunity to water those seeds, and that God will cause growth of those seeds (1 Corinthians 3:6-8). I pray Patrick would be one God harvests from the fields already white (John 4:35), extending to Patrick the gifts of repentance and faith in Jesus Christ the Lord., and causing him to be born-again (1 Peter 1:3).

Join me in praying for Patrick’s salvation. Pray the Lord removes the veil of arrogance, absurdity, foolishness, and hatred for God from his eyes (2 Corinthians 4:4-5). Pray the Lord breaths life into Patrick’s soul–a soul presently dead in sin (Ephesians 2:1-3).

I met Bentley and his grandfather Steve while fishing at Pride Lake, in Scott County Park. This is the story of God's gracious providence. A three-Fold Purpose For me, there is a three-fold purpose … END_OF_DOCUMENT_TOKEN_TO_BE_REPLACED