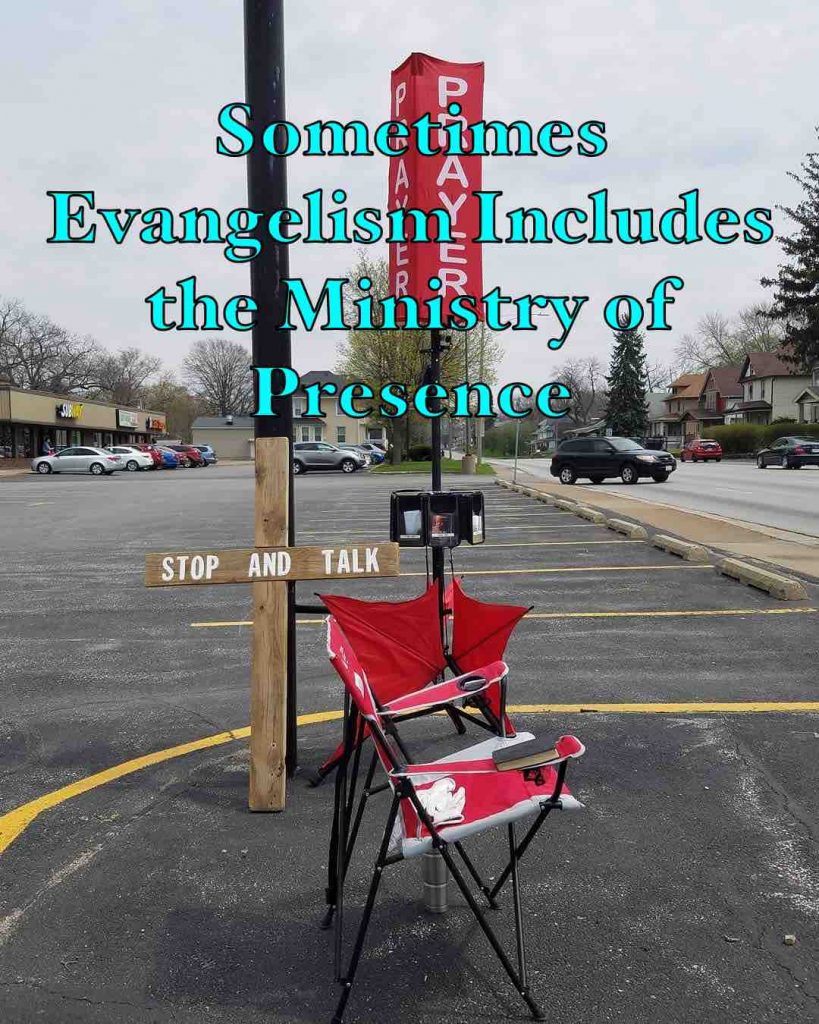 Janet stopped to talk. As I knelt next to the driver’s door of her car and listened to her, I was reminded that sometimes evangelism is a ministry of presence.

Yesterday I spent a few hours at the corner of Locust and Marquette, one of my favorite evangelism corners in my community—Locust and Marquette. To say it has nothing to do with the Whitey’s Ice Cream on the corner would be, for the most part, genuine. I love the ice cream there, but I’ve never indulged while doing ministry. Besides, because of the current pandemic, like so many businesses around the world, Whitey’s is closed.

In all seriousness, I love the corner of Locust and Marquette because of how many wonderful gospel conversations I’ve had there. Here are a few:

“Will You Make a Video for My Dad?”

Steve was a Man with a Broken Heart

Did the Lord Save Chris and Ann Today?

Tactically, the corner sees a lot of vehicle traffic and some pedestrian traffic. The sidewalk is almost dangerously close to the street, which makes me and my “Stop and Talk” cross easy to see. The Whitey’s parking lot is large, easy to enter and exit, and puts those who stop to talk to me in close enough proximity that they don’t have to leave their cars.

On this day, not only was I at the corner with my cross, but I also set up the Prayer Stand.

People honked and waved at me as soon as I pulled the cross out of my car. As I’ve mentioned before, consistency in street evangelism—being at the same places on or about the same times of day—matters.

Praying with the Tree Service Guy

I wasn’t on the corner long when I looked at the cars stopped on southbound Marquette. In the #2 lane was a small pickup truck with the name and logo for a tree service on the driver’s door. The name of the tree service revealed the first name of the company’s owner. The driver, a man probably about my age looked at me and smiled. Through the open driver’s door window, he barked, “I’ll stop and have a prayer with ya!”

My first impression was that the man’s enthusiasm was genuine, but I just never know what or who I’m going to run into when I’m on the streets. There have been times when people have honked and smiled and rolled down their windows seeming to want to talk when it was just subterfuge to get me in a good position to hit me with their projectile of choice. Others have done similar to set me up for verbal abuse.

Somehow, when the light turned green, the driver of the truck moved from the #2 to the #1 lane and made a left turn onto Locust. I watched as he turned left into the parking lot. He parked in the stall nearest me.

The man got out of the truck. We shared a coronavirus fist bump. I handed him one of my church’s gospel tracts.

“Are you John (not his real name)?” I asked as I pointed to the same name on the door of the truck.

John spent the next minute or so testifying to the reality of the Creator and the absurdity of the “Big Bang Theory.”

“Tony, the Universe is so big and this planet is just a speck. There’s gotta be a God! There’s no way all this is just gonna happen!” John insisted.

I agreed, of course.

I asked John where he worshiped. My heart sank a bit when he told me the name of the church. While I know nothing about the specific church John attends, the association of churches to which John’s church belongs and bears the name is responsible for more than 30 years of spiritual and theological insanity—literal charismatic chaos.

Since I knew very little of the man in front of me, nothing really beyond his affirmation of the Creator and creation and his church affiliation, I made sure to pray the gospel. I also prayed for both the nation’s and the Church’s repentance, in the wake of the pandemic.

We both said “amen” and shared another fist bump.

John gave me his business card and invited me to stop by his house, any time, for more prayer. Once the pandemic dust settles, I plan to give him a call.

John got in his truck and drove away. Within the hour, John drove back through the intersection, leaned out the window, and yelled, “Call me!”

If nothing else, John is enthusiastic about prayer and desires fellowship with other believers. Certainly, can’t and won’t fault the guy for that. I thanked God for the opportunity to meet and pray with John.

Sometime later, a small mid-’90s-looking, gray sedan pulled into the parking lot. A diminutive, elderly lady was behind the wheel. She didn’t pull into a parking stall but instead parked outside of the stalls. Again, Whitey’s was closed, so she had the parking lot to herself.

The lady smiled and waved at me to walk over to her car.

“You must be so lonely out here,” the lady sympathetically said.

“Well, sometimes it can get pretty lonely, but then nice people like you stop to talk to me,” I replied.

The lady smiled, slowly dropped her chin to her chest, and batted her eyes. Janet was her name. She was 82.

Before I could even reach into my pocket to remove a gospel tract, Janet began to talk.

While she was concerned about me being lonely, I think it was Janet who was the lonely one.

We talked (well, I mainly listened and broke in with an occasional “uhm-hmm” to let her know I was tracking with her) about everything and anything that was on Janet’s mind.

Janet began by giving me a brief discourse on the importance of wearing masks in places like Walmart. She was consistent; she was wearing a mask. But she pulled it down from her face onto her chin so she could speak to me more clearly. It wouldn’t do either of us any good during the duration of our conversation.

Janet was sweet, but I could tell she was a bit of a pistol—maybe with people she knows better than the guy on the corner with a cross. Or, maybe I was seeing remnants of Janet earlier in life. There was just a hint of a rough edge and timely sarcasm in the way she spoke. I liked her.

I handed Janet a gospel tract. She sweetly thanked me as she perused it.

Janet said goodbye and put her car in reverse no less than three times. But the car never moved. It was as if each time she put the car in reverse, it reminded her of something else she wanted to say or another story she wanted to tell. Her multiple goodbyes reminded me of the pastor who says “in closing” long before he plans to end his sermon.

Janet was on her way to deliver masks to a nursing home, but she just couldn’t seem to bring herself to leave. Eventually, Janet did issue a final goodbye. She ever-so-slowly backed her car up a few feet, before, with equal speed (or lack thereof) and care, turned the wheel to the left. She made her way out of the parking lot and onto busy Locust Street.

I had a reoccurring thought as I sometimes stood—sometimes knelt listening to Janet. There are times when an aspect of evangelistic ministry is a ministry of presence.

I first heard the term “ministry of presence” when I began serving as a chaplain to my fellow deputies, with the Los Angeles County Sheriff’s Department.

Unfortunately, for many chaplains, the doctrine of “ministry of presence” is but an excuse to not say anything to the people they are called to serve. The doctrine is all-too-often an excuse to replace the Christian’s biblical call to proclaim the gospel with a wicked theological position built upon a statement wrongly attributed to St. Francis of Assisi. You’ve probably heard or seen it before. “Preach the gospel at all times, and when necessary use words.”

While the doctrine of “ministry of presence” is often misused and abused by men (and women) who are gospel-less chaplains, there is a legitimate application of the doctrine in chaplaincy and in evangelism.

During my eight years as a department chaplain, there were many occasions when just being in the patrol car, locker room, or at the hospital bedside brought a level of comfort to those present. A hand to hold, a shoulder to hug (or cry on), an ear to chew often didn’t necessitate me saying anything. There were times when people told me how much I helped them and how much my counsel meant to them, and I hadn’t said a word. My time with Janet, in the Whitey’s Ice Cream parking lot was like that.

But to leave Janet with nothing more than a nice conversation, to settle for just being “present” for a sweet, lonely, older lady, would be to fail to love Janet in any real and lasting way. Oh, it would have met her immediate, temporal need to speak to someone (and it certainly feels good to make others feel good), but it would have done nothing for her soul.

But the “ministry of presence” certainly can be a segue, a conduit for the gospel.

Preach the gospel at all times, and when necessary use gospel tracts, books, amplification, or whatever means necessary to communicate the verbal message that is the gospel.

There were times, plenty of them when my deputies did not hear the gospel from me (in an audible sense). But in those times (at least as often as I could), I gave them gospel tracts or a copy of a book I wrote with them in mind. That’s what I did with Janet. I didn’t verbally communicate the gospel to her. For more than a half-hour, I listened. Janet was lonely and needed someone to talk to. When she decided she had said enough and it was time to leave, I made sure she didn’t leave without a gospel tract.

There may be times when you find yourself doing all of the listening and little or none of the talking. You may find yourself wondering if you will get to share the gospel. Don’t fret. Keep listening. Show genuine care for the person in front of you, through the ministry of presence. But don’t let them leave, if you can help it, without receiving a gospel tract. Remember, the gospel is the power of God for salvation. You’re not. Your ability and desire to verbally communicate the gospel isn’t where the power lies. The power lies with the gospel itself. So, if circumstances (time, environment, etc.) preclude you from verbally communicating the gospel, if the ministry of presence is the order of the moment, then put a gospel tract into the hand of the person before you part company. The powerful gospel in that paper missionary will do the work God intends.

Today I was blessed with the opportunity of preaching the chapel message at Unity Christian School, in Fulton, IL. The invitation came through the school's choir director, Paul Hopkins. My … END_OF_DOCUMENT_TOKEN_TO_BE_REPLACED